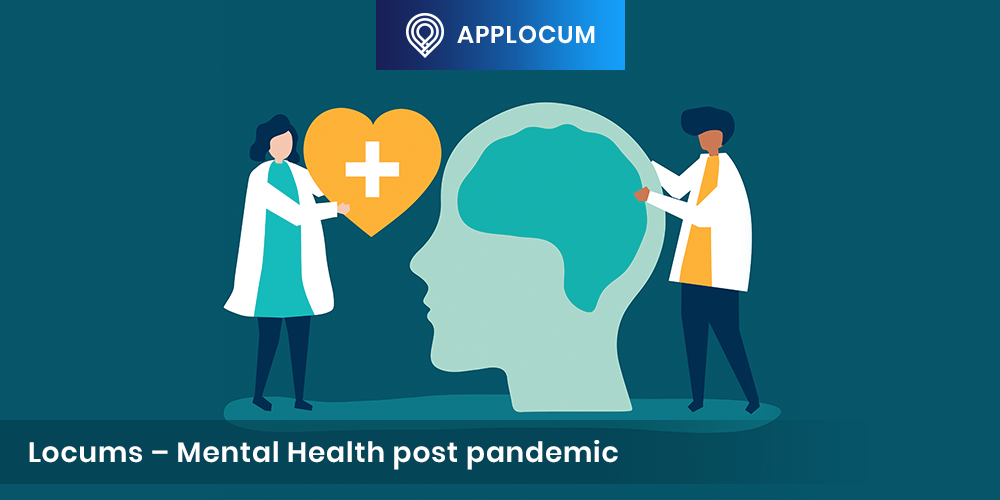 There is no doubt that the effect that the Coronavirus pandemic has had on Locums has been life changing, especially to their mental health. Let us not forget however, that the entire medical profession has been affected whether a GP, ODP, surgeon, nurse or non-clinical, nobody really knew what each day would bring. The virus hit the UK with such speed and vengeance before anyone could think clearly about how this would affect them – all of you were more concerned about patients’ wellbeing than your own. As true professionals, you jumped straight in and never thought about the potential dangers involved for you personally.

Whilst those patients who contracted the virus were fighting for their lives, those of you involved in caring for them every day, often with extremely long and exhausting shifts, rarely gave a thought for yourselves. Along with support given to families who could not see their loved ones, this situation would have been physically, emotionally and mentally draining. Added to that, there was the potential of having to distance yourself from your family, if any of them were vulnerable, or, in the worst case, you contracted the virus yourself. The issues you may have had to cope with were immense, increasing the pressure on yourselves to the limit.

Mental Health Awareness Week this year was 18th-24th May and has been outlined every year since 2001. Prior to this, on 6th May, Dr Jenny Harries, Deputy CMO for England warned that even when the pandemic was under control we would not see the effects of the virus on mental health, particularly for those working under crisis in the NHS. Ms Harries reported to the House of Commons that she was fearful of the ‘post-pandemic’ effects that the aftermath would have on healthcare workers, and that every consideration and support for them should be a priority.
It is often not until a crisis abates, that individuals realise the full impact that it has had upon them, and potentially suffer a mental crash in terms of anxiety, depression, untold stress and burnout. These feelings could be exacerbated whilst there is still the possibility of a ‘second wave’, and can include everything from financial pressure to family concerns for health and wellbeing and whether the future of locum work would ever be the same again.

Whilst the BMA provided a hotline staffed by trained volunteers to listen and help those with potential mental issues, it was felt that this wasn’t quite enough by those in the profession and that accessing support was not as easy as it was purported to be. 25% of GPs stated that they could not receive the psychological support they needed.

A recent survey conducted by AppLocum did show a variety of results on how clinicians have been affected by COVID-19, and whilst many mentioned mental health, there were quite a few other concerning issues, all of which could have repercussions in terms of overall wellbeing. We would like to share these answers (anonymously) with you and welcome any feedback. Please continue to share your thoughts with us, as these are only our initial findings, and more responses are coming in every day.

How our locums ‘spoke out’

After collating an initial number of results, a picture developed of how our valued locums were thinking and feeling. Many reported that they had to widen their horizons rather than hoping to get GP surgery locum placements, mainly due to many surgeries being closed and having to work remotely. Placements were few and far between but could be backed up by remote work or out of hours, and on some occasions, working for the 111 service. Considering that locums often choose this work to fit in with family commitments, this did tend to cause disruption on the home front (children off school, partners also working unsociable hours etc.). Others reported that several regular shifts were cancelled, leaving them unable to organise their lives. Fortunately, other candidates stated that in terms of placements they had little difference and had not suffered loss of work.

The most encouraging aspect from our locums was that after admitting that they felt anxious and fearful at the beginning, was that the work had become so rewarding after only a few days.

The primary concern for GPs and locums is always patient care. Some patients may have ‘missed’ diagnoses, and other conditions could well worsen during the pandemic. Catching up on the backlog of patients that need to be seen would be a large mountain to climb, let alone facing the increased paperwork that needed to be done. Until hospitals are fully operational, referrals will be difficult, thereby increasing waiting lists to unbelievable levels, from which the NHS will take a long time to recover.

Locums have been considering their long-term future in the profession, particularly during this unsettling period. Whilst these are only initial findings, we have been able to understand what emotions locums are experiencing. This will enable us to take an in depth look at how we can be most valuable to our candidates, once all survey results have been collated.

Whilst there were obvious situations such as safety, protection (or lack of it), high risk positions and mental health as primary concerns, thinking about survival in terms of day to day lives without COVID-19 was paramount in their minds. There may be, potentially, a change in how primary care operates long term which would affect them financially. Issues such as sick pay and benefits were mentioned, along with savings being drained due to lack of placements.

How AppLocum can help

AppLocum have continued to place our excellent candidates throughout the pandemic and will unfailingly persist in doing so. Locums have been generous in their comments – ‘professional’, ‘friendly’, ‘engaging’, ‘approachable’, and ‘motivated’. Thank you to all of our locum team. If you have any queries, or would like support from us, do not hesitate to call or drop us a message.